Re : OSR Guide For The Perplexed Questionnaire

This blog is in response to [redacted]:

OSR Guide For The Perplexed Questionnaire

1. One article or blog entry that exemplifies the best of the Old School Renaissance for me:
[redacted]

2. My favorite piece of OSR wisdom/advice/snark:
Just make shit up. You'll be surprised at how good it can be. Focus on the game, not the mechanics.

3. Best OSR module/supplement:
Two possible answers:
(a) Zzarchov Kowolski's Gnomes of Levnec - a fantastically fun investigative adventure with folk horror, ancient evil, and of course gnomes.
(b) Jennell Jacquays' Caverns of Thracia, but just keep the maps and throw your own shit in there. Best game I ever ran featured a troll dressed as Macho Man Randy Savage.

4. My favorite house rule (by someone else):
Neoclassical Geek Revival is basically nothing but a collection of Zzarchov Kowolski's house rules. I also liked Adam Muskiewicz's technique of incorporating Jason Lutes' Perilous Wilds into D&D wilderness encounters

5. How I found out about the OSR:
It must have been after hearing about Swords & Wizardry Day, back when I heard about it on a podcast. Shortly afterwards, I found Dungeon Crawl Classics at my local convention and bought a copy of the book.

7. Best place to talk to other OSR gamers:
For the next few months, still Google+. I hope that I have made enough impressions there so that people may actually interact with me on this blog. I think it would be a good idea for all of us to comment on each other's stuff more.

8. Other places I might be found hanging out talking games:
Most of my gaming now occurs on Discord. As I said above I imagine without Google+ we may regress to online blogs such as this one. What would really be cool is if we all started playing more games together instead of talking about games. Sort of like a FLAILSNAILS revival.

9. My awesome, pithy OSR take nobody appreciates enough:
The OSR is only what you make it, and never what you think it is.

10. My favorite non-OSR RPG:
Call of Cthulhu, if that qualifies. It is in its seventh edition, although it remains largely unchanged from its original form in 1981. If we assume Call of Cthulhu qualifies as OSR instead, then I will probably say Legend of the Five Rings. I have not had a chance to play the new 5th Edition from Fantasy Flight Games, but I've had some enjoyable games using 4th Edition. However, I think that my enjoyment of the game was largely dependent on the feudal Japan aesthetic, as opposed to the mechanics. I could probably run an OSR game in the Rokugan setting with less of a headache than if I were to try to run a game in a canonical L5R system.

11. Why I like OSR stuff:
There are no rules lawyers. If we run into an edge case, I can simply make a ruling without having to look up the said rule. Even if someone else at the table knows the rule, I can overrule it using logic if I need to.

12. Two other cool OSR things you should know about that I haven’t named yet:
1) Chance Phillips.
2) Into The Odd

13. If I could read but one other RPG blog but my own it would be:
I've already shown Z's blog, so how about Jeff's Gameblog

14. A game thing I made that I like quite a lot is:
My dice-pool skill mechanics for Lamentations of the Flame Princess

15. I'm currently running/playing:
I am taking a break from running games as I try to prepare for U-Con in November. I'm playing in an iron age Neoclassical Geek Revival game as run by the system creator, Zzarchov Kowolski.

16. I don't care whether you use ascending or descending AC because:
Whether you hit or not really isn't of much importance. Also, we need to hurry up and get through combat. Best practice dictates that if you have entered combat, you've probably lost anyway so keep that in mind.

17. The OSRest picture I could post on short notice: 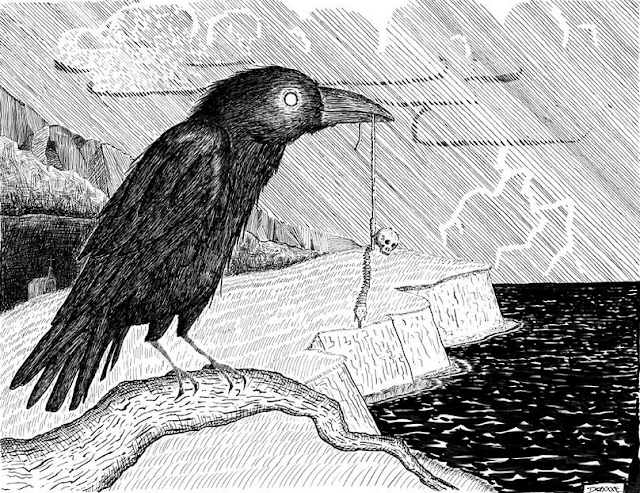 This is my own artwork which I figured I would use rather than try and steal someone else's stuff.
Posted by Dan D. at 5:01 PM