On Setting and Culture, 1: Another of These Desert-Loving English

I think you are another of these desert-loving English. Doughty, Stanhope, Gordon of Khartoum. No Arab loves the desert. We love water and green trees. There is nothing in the desert. No man needs nothing.


When I was pretty young, maybe just starting my teens, I rented (from the Blockbuster Video on Military Highway) the 1962 film, Lawrence of Arabia. I immediately considered it the greatest film ever made, and have since dialed it back to simply my favorite film of all time. Beautifully shot and an epic tale, the film is chock full of symbolism and themes that I don't think I'll ever fully comprehend. It's also probably inadvertently set the standard by which I have judged every fantasy setting.

I periodically think about the film in different contexts. The quote above from Prince Feisal (played by Sir Alec Guinness) is always one that I come back to, and represents one of the film's key themes. Lawrence is a character who does not fit in England, but who will never truly be an Arab, despite his great victories for the Arabian tribes. He is a man without a culture or identity, and this causes a great personal crisis.

As your stereotypical white guy, I have strong genealogical ties to a variety of European cultures. Some other stereotypical white guys I know have stronger ties to one particular culture (e.g., Polish, English, or German) than I do. I know, based on my grandparents' lineages, that I'm a combination of at least three different European nationalities. If there's any nation-based culture that I belong to, it is simply that awkwardly catch-all American culture, which is assembled from pieces of other cultures - a brownish-grey clay that is achieved by mixing all the cups of Play-Doh together.

In the film, an early conversation with his Bedouin guide establishes that Lawrence is not your typical fat Englishman. He is different. He does not fit in with his own culture and thus is able to cling to another. What a shock that a kid who eventually gravitates towards Dungeons and Dragons, one of the bastions of geekdom, would identify with this character. If there's anything that could paint me as even more of an outcast, it's that I didn't even have friends who played the game. There were lots of nights spent alone reading the 2E DMG, letting my imagination entertain me.

(And who am I kidding. I'm doing the same thing right now, keeping a blog of all the things I think about while thinking about running RPGs. Only instead of having one DMG, I have the entire internet.)

Dungeons and Dragons conjures a lot of different imagery for a lot of different people. During my period of new fascination with the game, Dragonlance seemed like the dominant setting on the shelves, with Elmore and Easley at the artistic helm. Despite the existence of settings such as Dark Sun, the feet of D&D were firmly planted in Medieval European fantasy. I had never heard of J. R. R. Tolkien, but I knew his work through pure osmosis. It was not until my first actual game that I realized just how deeply my favorite film had influenced me. We were English explorers who were shipwrecked on a fantasy continent. No sooner did the opportunity present itself than I had my character abandon all aspects of his former self and establish himself in his new world, taking particular interest in the towns and villages on the edge of the desert.

Even now, I find myself nearly incapable of playing a game in a setting that is established as Medieval and European in nature; like Lawrence, I find myself an outcast in such a setting. Dungeon Crawl Classics, although setting-generic, consistently draws from literature contained in the "Appendix N" of the 1E DMG—i.e., Gary Gygax's reading list. While there are elements of  the Medieval era in those stories, there is a heavy bias towards the nebulously ancient (e.g., Robert E. Howard's Conan) or utterly exotic (e.g., Moorcock's Melniboné).  I would say that the closest thing to medieval fantasy in which I've felt comfortable is the assumed setting of Lamentations of the Flame Princess. Far more often, however, I will gravitate towards the exotic. LotFP as a publisher has done quite well in this regard. World of the Lost (Chandler), Qelong (Hite)  and Carcosa (McKinney). In addition, there are various "OSR" materials that deviate from the standard quite well. One that receives considerable acclaim (that I have yet to read) is Yoon-Suin (McGrogan).

I titled this post as the first of a series because I'd like to continue the idea of exploring why the standard D&D Settings do not sit well with me, Only next time, instead of my favorite film, I will look at my favorite book of all time.

[Note: the links above are affiliate links to products on RPGNow. Apparently if you buy the products via a link on my page, I get a kickback to spend on other RPG stuff]
Posted by Dan D. at 10:25 PM No comments:

An update: GenCon, Settings, and Systems.

I thought I would let you know what I've been doing in gaming lately.

First off, I can confirm now that I am running four games at Gen Con this year for Goodman Games as a Judge for Dungeon Crawl Classics. DCC is a go-to system for me, as it is what I typically run and play at conventions, and convention games are pretty much 90% of what I get to do in gaming. I think it's got a great mix of old-school and new-school mechanics conventions, and the rules have been written in order to produce a very definite flavor of game.

If anyone reading this is going, I am running Escape From The Purple Planet, The Jeweler That Dealt In Stardust, Caverns of Thracia, and my own adventure, The Temple of Laserface and the Kung-Fu Masters of the 4th Dimension.

The links above are to the event pages.

Although I have run it twice at GaryCon already, I've officially started actual writing for The Temple of Laserface and The Kung-Fu Masters of the 4th Dimension, which will be my first written adventure, assuming it sees the light of day. I am still not 100% sure whether I will keep it system-neutral or specify a rules set. Candidates are DCC, Lamentations of the Flame Princess, or Swords & Wizardry. It would certainly be the easiest to specify no system, as then I wouldn't have to worry about licensing or trademarks. But I feel like the flavor of the game lends itself towards DCC or LotFP.

Before I leave the topic of Gen Con, I will also be excited to hopefully get to meet some of the creators behind Lamentations of the Flame Princess, one of my favorite rules sets and probably my favorite publisher.

In the regular gaming front,  I'm also playing in a weekly RuneQuest 2 game on Google+, and have been since the end of 2016. I think the system is pretty good, although I have reservations about Glorantha as a setting, Half a year of playing, and I still don't have a good grasp on it. Ask me the difference between Pavis and Prax, and my eyes will glaze over.

A setting that I am much more drawn to is that of Tékumel. I've started reading Man of Gold, Prof. M. A. R. Barker's first Tékumel novel. It's a bit early, but I think that setting is much more my jam, since there's virtually no aspects of medieval Europe present. It is all heavily inspired by Mesoamerica, India, and Middle Eastern cultures.

Now I'm hoping to play in a Tékumel campaign, but I am reading through The original Empire of the Petal Throne fairly slowly, in the hopes of familiarizing myself with the most basic aspects of the setting. More to follow as I learn more about it, but I have just finished reading through the EPT introduction, and I'm going to see what the rules are like. I also have a digital copy of Jeff Dee's Bethorm, but I feel like I should stick to one source as I learn what's what on Tékumel.  If nothing else, I will at least be well armed for the next U-Con convention in November.
Posted by Dan D. at 4:56 PM No comments:

My adventure is coming along, slowly but surely. I am currently writing random encounters for the journey to the main location. Already I am up to like about ten pages. I think that everything I've written thus far is a cool idea that might inspire something. At the same time, I'm worried about being too verbose.

Does anyone even run modules as written?

Here's a recent drawing. I am thinking about incorporating it somehow. 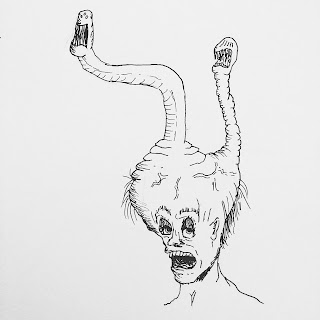 You have already seen this on my instagram;
@dommephoto

I am gradually shifting that feed from photography (my old hobby) to my boring ass drawings of game stuff. I like the @dommephoto name though so I'm keeping it.

Anyway, sorry for the brief post. If I keep talking about this project, then there's less of a chance I'm going to let it die.
Posted by Dan D. at 6:45 AM No comments: