So I'm trying to think of what to do with this blog, and I'm not coming up with ideas. So I decided to try coming up with ideas for gameable content and I'm going to use this post as a dumping ground. Note: Please give me feedback. Do these ideas suck? Is this concept interesting? Is anybody listening? Etc.

From exotic lands, a species of worm that feeds on plant matter and excretes a mildly toxic waste through its skin. The toxin is also an hallucinogenic narcotic. Over time emerged the practice of guiding a worm up one's nostril to expedite the toxin's delivery to the blood-brain barrier. Nothing short of pure ecstacy as you fall down on the floor and writhe for a while.

Worm farms have developed in the seedy underworld. Fat druglords keep spaghetti-like piles of them in jars with fragrant mulch, so that snuffing a worm will not be such a turnoff. Plush couches and pillows are provided so your body can writhe in the height of comfort

So every decent city has a Thieves guild. it's like having a Buffalo Wild Wings. For an interesting take on one, have the Guild be (tied to) a religious order. You see, being a thief is not about gaining something material, it's about depriving someone else of something they value. And some people value their material possessions more than they value their relationship with Insert-Deity-Here. The wealth that the Guild accumulates is redistributed to the congregation and faithful.

This approach can also add an extra dimension to NPCs within the guild beyond the usual thieving stuff. How closely do they follow the principle of giving back to the faithful? Are they more likely to target worshipers of a rival god? What about holy days; is it forbidden to steal on those days? Or maybe the deity forbids the use of poisons/blades/etc.

There exists a fungus creature that emits spores thrice per day, or whenever subjected to a slashing wound. there is a 20% chance that those in the immediate vicinity of the spores will contract fungolepsy.

The spores spread to various areas inside the body and do not interfere with normal body functions. However, they feed on melatonin in the bloodstream. For every day that a character has contracted fungolepsy, they lose an additional 1d6 minutes of sleep as the fungus spreads. They may not notice until a few days or even weeks have gone by. If your game does not have rules for sleep loss, roll a number of d6's equal to the number of hours of lost sleep. For each 5 or 6 rolled, you get a -1 penalty to all rolls, and you lose 1 hp from the total that you would have healed due to rest.

Once the daily sleep loss has accumulated to more than 4 hours (240 minutes), the character will begin to hallucinate periodically.  Once there is total (8 hours) sleep loss, the character will die in CON/2 days. To be cured of fungolepsy, a character needs to find a specific fungicide which is safe to drink.

Due to the varying nature of campaign worlds, the GM shall decide the effects of a character trying to use magical sleep in order to counteract the effects of fungolepsy.
Posted by Dan D. at 10:04 AM 1 comment:

Ah, yes... regarding the previous post, I forgot all about another goal I had for 2017. That is, I would like to practice my fantasy drawing. Below are some examples of what I did in 2016. 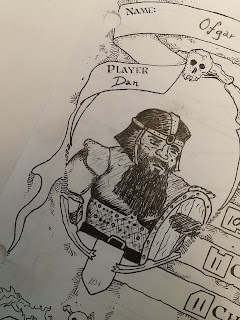 So this the one that started everything. This was for +Adam Muszkiewicz's Iron Coast game (ACKS). I was using a +Dyson Logos B/X character sheet which had a big blank spot for a character portrait, and I felt it was a waste if I didn't draw something in it. I looked for a dwarf drawn by +Stefan Poag (my favorite contemporary pen-and-ink artist) and I found an inspiration image.

Edit: Found the sheet I used above. Click this link to go to Dyson's Character Sheet page, then scroll down to where you see "Elaborate B/X Dungeons & Dragons or Labyrinth Lord AEC Sheet" 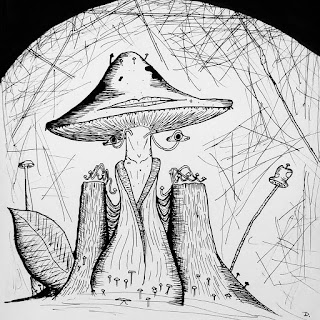 Another Iron Coast image, this was my attempt at drawing the Shroom Sultan. [edited:] The Sultan rules over all the intelligent fungi in the area he occupies, and his presence defines the boundaries of the sultanate. He is personified here on a throne of sorts. The criss-crossing lines in the background are a poor attempt of representing the network of fungus that constitutes the sultanate/sultan. 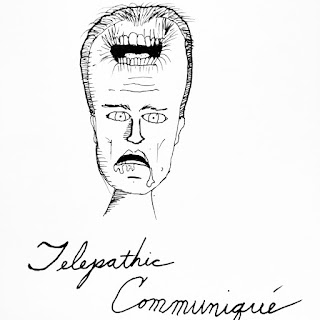 Sort of an Iron Coast image, this sketch was inspired from that time when the party attended an Orroztalani feast and ate the succulent meat of a giant centipede, and we all had a telepathic conversation with our new temporary mind powers. 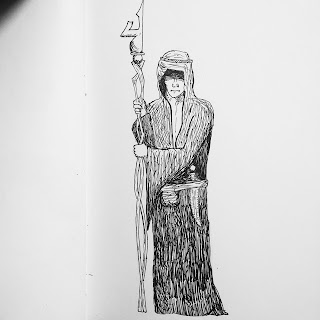 From one of my last sessions of ACKS, this was a wizard character for a Crusades-era game run by one of my fellow players in the Iron Coast game. Real life has torn me away from the group, but I understand the game is still going strong. Ultimately, I'm not sure if I'm a fan of the system enough to revisit it given the other games I have on my shelf. 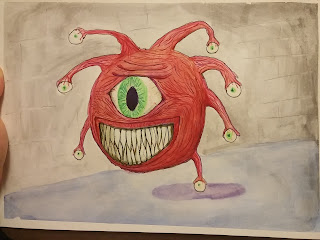 I decided to try watercolor painting as well, although this Beholder is watercolor and the background is acrylic. I might try more painting in the future, but I didn't like this one so much, with exception of the how the teeth came out. Standard D&D monster, too, and not enough lighting consideration in the scene. 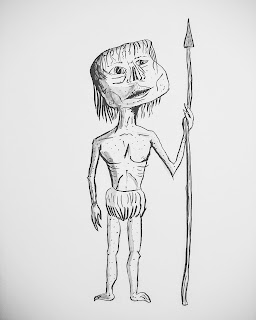 It was at this point that I thought I might actually be getting better. This was a generic pygmy dude, maybe appropriate for +Kiel Chenier's new Blood In The Chocolate now that I think about it... Anyway, this was done (a) without a pencil sketch first, (b) entirely with a brush instead of a pen, (c) using an ink wash for shading, and (d) entirely in under ten minutes. 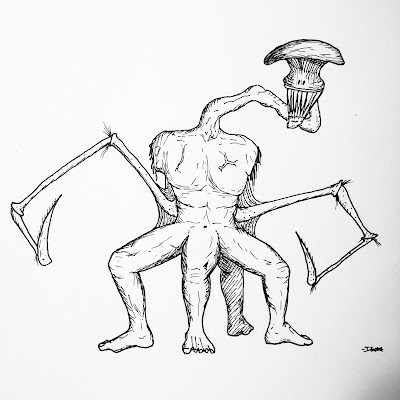 My last real drawing of the year, this one started off by drawing some lines on a sketchbook page while I was waiting on a layover in some airport. I think it might have been Salt Lake City. Anyway, I finished up the inking that evening in the hotel room, just before Game 7 of the World Series started. This wasn't for anything in particular, but I can safely say I was trying to channel +Gennifer Bone while I was working on it. When I posted it, I got a lot of compliments on the feet, which is cool because I didn't use any reference images while I was drawing this one.

So yeah, I think I should try to keep up my drawing during the new year. Maybe it will also help my gaming.
Posted by Dan D. at 10:32 AM No comments:

Lo, it has been a long time since I've reached out with any news. Last time I was here I was comparing RuneQuest 2 and RuneQuest 6. Well, I've been away for personal reasons—namely, work has been exceptionally busy, we bought a home, and we had our first child. Weekends are completely dead to me due to parenting responsibilities, but I have been able to find a magnificent group to play RuneQuest 2 with. The main reason is that we only game for two hours, and it's on a weekday, which means I have a narrow window when I'm the only one awake. I might make future use of this window to try running my own game on a different weeknight, which leads me to my topic.

Yes, here will be the space where I outline my goals for the coming year, and where I can turn my eyes in December to evoke substantial disappointment.

I think that I need to decide what to run, then build up a group based on both my schedule availability and who might be interested in what it is I'm running. I feel like DCC might be the most doable, but I am actually considering a number of different systems.
Now that I see everything laid out in a list, maybe DCC isn't such a clear front-runner anymore. But whatever the case, I want to actually follow through once I decide on something, rather than constantly waffling about what would make the perfect game.

2. Run something in at a table that isn't a con game.

Since moving to a permanent residence last year, I've finally set up some long-term roots, and I really should get a regular table group together. I've started making some connections, but of course things are slow for a number of reasons. First, obviously, is our baby. However, she is also the reason that the "office" (and likely eventual gaming room) is still a complete mess. Then there is the lack of gaming spaces in town. I feel like if I were closer to Ann Arbor, I could weasel my way into a public space for a "D&D" game every couple of weeks. Nevertheless, I have been making a few local contacts via social media, so maybe I will use that as a starting point, along with a flyer at the local comic shop.

3. Produce something to contribute to the DIY/OSR community

Unlike last year's GaryCon, which was highlighted by frustrated attempts at joining games run by people I really admire, this year I will instead be focused on running games. Half of my scheduled events are for an adventure idea I have, which I am calling The Temple of Laserface and the Kung-Fu Masters of the Fourth Dimension. It will either be a really fun time, or I will be so unprepared that I will fall flat on my face and the con will be a disaster. Assuming the former, I have wild dreams of further developing it into an honest-to-god published adventure, which would be my first real contribution to the community. (It should be noted that one of the Laserface games is going to be run in DCC and the other in S&W. I'd have to look at legal consequences of deciding to tie a published adventure to a particular rules system.)

Let's face it: this blog has not seen a lot of action. Maybe if I pare back my expectations on my writing output, I can make posting things here a bit more consistent. If I can think up a good amount of gameable content, maybe I can even blend this goal with #3. Let's face it, there are a lot of great blogs out there that regularly post things you can take directly for your game. In fact, here's a link to a page that's collected some of the best content that's freely available for a modern take on a Dungeon Master's Guide: