I drive down to Indy. I park my car at my work colleague's house. He is gracious enough to let me keep my vehicle there while I attend Gen Con. Spend 5 minutes trying to explain D&D to him. I don't think I do a good job. Get an Uber to Indy. Guy is an unemployed electrical engineer. Smart dude. Sign of the times.

Get checked in. Where's Mike? Down at the Yard House. I'm rooming with Mike Evans, who I've gotten to know well over the last year, and his friend Omar. So I go to the Yard House. Also there are Z, James Raggi and Jez Gordon. I immediately feel sorry for Maria being hajjed off to Nerd Mecca. She seems pleasant.

Z has a reputation for being a jerk online. To the contrary, he is very personable and nice. Even though I'm clearly just some dude who's along for the ride, I get the sense that he welcomes and respects me. Z continues to be a great guy throughout the convention. He is also very well read. Z and James mention Thomas Ligotti's Songs of a Dead Dreamer and Grimscribe. I have never heard of this book. I should look into it.

Mike and I get our Goodman Games GM briefing, and get our GM badges. Rejoin Jez and Omar for food. We talk about game creating and ideas. Jez tells me to get my ideas out there and even shares my recent blog post. I get really jazzed up about FERAL. All in all a great conversation for getting pumped up for Gen Con.

9 AM first DCC game. Escape From the Purple Planet. My only funnel of the convention. All the players have a great time, but it only lasts about two hours. Don't know if I'd run this at a convention again without some serious tweaking.

On the bright side, I get to visit the dealer hall early. Get my Maze of the Blue Medusa "All Rolled Up." Very cool. combination dice bag and storage kit. If packed smartly, it's all you need for gaming.

The LotFP booth is magnetic. I probably spend wasy too much time there. Not only do I get to meet Patrick Stuart, but I then get to witness the first moment Patrick and Z meet in real life. That is magic.

The other booth I spend a lot of time at is the Goodman Games booth. Much bigger, being run by a horde of people. Immediately grab a number of DCC modules, a DCC trucker cap, yadda yadda. There was never any question. I'm impressed I spend so little. Get to meet Stefan Poag and Peter Mullen. Mullen tells me how he makes those awesome color images for games. I manage to get all the possible signatures I can for my DCC Gold Foil book.

Meet up with Mike, Z, Zzarchov Kowolski (who I'd only met online), Patrick, Stokely, and others and we all game in a PvP Lamentations game run by Z. I thought we were just going to fight each other but no, we start on opposite sides of the dungeon. Way cooler idea. I order hasty room service and manage to get out in time to run Caverns of Thracia at 8 PM. In-game, I take a magic sword and Zzarchov (team leader) pushes me down a pit. I think we end up winning.

Caverns of Thracia is great. The group sticks to Level 1 of the dungeon because they find a secret prayer chamber. Most of it is your standard dungeon crawl. However, with about an hour left, the fighter goes into overdrive so the group can explore as much of the dungeon as possible. Continuous escalation until the final encounter: three ogres with one dressed as Macho Man Randy Savage. The PCs take over the dungeon in the name of Thanatos, God of Death.

Morning game at 10. Turns out it was cancelled because Clint Krause got rear-ended by a semi. Thankfully he's OK. More dealer room. I end up buying a drawing of a wizard done by Z. It's really fucking good. I can't remember if it's today or Thursday when I get all the signatures for my books. Like, all the signatures. Even the zine where Patrick did an interview. Even The Worst Breakfast by China Mieville and Z. Even Death Love Doom, which Raggi called me a sick pervert for owning. That made me smile.

The reason I spent so much time at the Lamentations booth was because I didn't want to interrupt any potential sale to ask for a stupid signature on a book that was already mine. I begin to get very self-conscious about my lurking. No one seems to be put off by my presence, so I just stay out of the way while waiting for a lull so I can ask for my stuff signed.

Also, I think Friday was the first time I met Jacob Hurst? I love this guy because he's a printing process nerd just like I am. Only he's got an actual product, the Swordfish Islands books. I'm calling it now. It's going to win some ENnies next year.

Game at 2 PM. The Jeweler that Dealt in Stardust. Level 3 DCC but I still manage to kill a player later on in the adventure. One player keeps cutting the faces off of spiders and collects them. I really love this one because it's an elaborate heist. Of course, the players make off with a haul of imitation treasure worth virtually nothing.

Evening, I drop off gear, grab a bite to eat and head to the ENnies. Get to meet Rob Monroe and his lovely wife. She talks with me about a wide variety of subjects but we spend a lot of time talking about Shakespeare. I have two versions of Macbeth I have to watch now. The ENnies go splendidly. Mike wins one, Spellburn wins one, and Lamentations picks up four. John Wick wins a lot of awards. I still think he's an asshole because of (1) his Anti-Tomb-of-Horrors rant, and (2) because of that goddamn hat. But he seems genuinely over the moon and I'm happy for 7th Sea. Also Mark Diaz Truman seems to have worked on it quite a bit and that guy seems cool.

ENnies after-party goes well. I'm surprised the Marriott let it continue to midnight. It carried on quite a bit more into the wee hours of the morning in the bar. I learned Stokely's Top 5 comedies so now there's a Nic Cage movie I need to see. Met Nicole and Stuart Pate, who cosplayed as the Flame Princess and Hugh Heftblade. Also got to meet Ken Beaumann who published Maze of the Blue Medusa. He was wearing a kickass Iron Maiden shirt.

Breakfast with Jez, and I think with Zzarchov, although that could be Sunday. I forget. But the one with Zzarchov we talk about an upcoming adventure of his. In fact, I've helped playtest two things for Zzarchov and I'm glad to know both are still in the works.

Sean Poppe shows up and actually delivers the news about Clint. (Again, I can't rmemeber if it's Saturday or Sunday...) Glad Clint is ok. We discuss art and projects and just keeping on doing shit. Sean gives me one of his zines and it's awesome.

Saturday at 2. Last game. The Temple of Laserface and the Kung Fu Masters of the 4th Dimension. It's a blast. Ends up with two wizards trying to outdo each other while spellburning twenty each. Sezrekan vs. Bobugbubilz. I ended up printing multiple copies of the "playtest" of this adventure out and handing it to people to read. It acutally consists of a lot of the stuff leading up to the adventure, but not the adventure itself. It's kind of embarrassing, given how incomplete it is.

Mike's kind of steering me towards publihsing the adventure as a DCC adventure. It's certainly zany enough for it. Although I also like the grittiness and groundedness of Lamentations of the Flame Princess, which I would be able to use if it were published as a system-neutral product. But the size of the DCC community would help me get an adventure out there a lot more effectively.

Anyway. After ToLatKFMot4D, I was suddenly left with a void. No more games to prep. Everyone is busy doing something else. So I get super depressed. I've never been remotely suicidal but it was intense. I wait until Inferno Road at the Embassy Suites, but not even that can cheer me up. I end up hanging out at the bar. Mike Evans shows up, and I chat with him, and Bob and Jen Brinkman. Jen asks me to sign her first DCC book, which she is putting into retirement. I sign page 88. Also hang out with James Walls and family before going back over to where Inferno road was. They are now playing Flammable Hospital, or at least what I assume is Flammable Hospital. Jez insist's it's "Jez Just Wants To Go Home." Jez, when will you learn IT'S NOT ABOUT YOU.

Sorry, that was an insider joke in case anyone was wondering.

Mike and Omar leave before I get up. I brought way too much shit, so I have to make sure I get it all packed up properly, which takes some time. I pack gradually, making sure that nothing gets damaged on the ride home.

I keep my Peter Mullen cover DCC book in my backpack. He signs it. I see him sell a boatload of artwork. There's a raffle at 2 PM but I have to hurry through the dealer hall to get to everyone.

Tales from the Loop is sold out. I buy one of the last two slipcase sets for Call of Cthulhu. I stop by Lamentations booth to buy one more piece of original Z art. A knight impaled through the gut. This and the wizard perfectly encapsulate D&D for me. I cannot wait to get the pair of them framed. 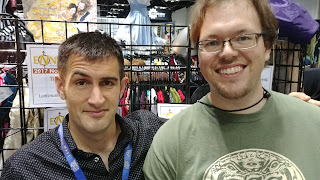 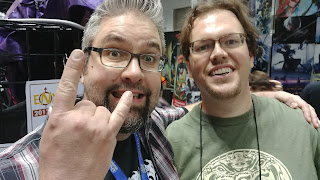 I go back to the hotel, and get my bag. The Uber ride is a blur. I'm kind of glad that my colleague is out and has left my keys in a hidden location. I don't want to waste any time. Have to get hom before there aren't even any fumes left to run on.

One big takeaway from Gen Con is the inspiration. Seeing Patrick, Mike, and the absent Kiel win awards for their writing inspired me to put some honest effort into getting my adventure down on paper. Players at my table have always seemed to enjoy it, and I think the DCC crowd would find it new and different. It may also be my foot in the door to being a serious creator. If, you know, it turns out I actually have any skill at being a writer.